my notes (and gripes) from using the picoferm for my most recent brew. this was an unimpressive first run with this particular product. 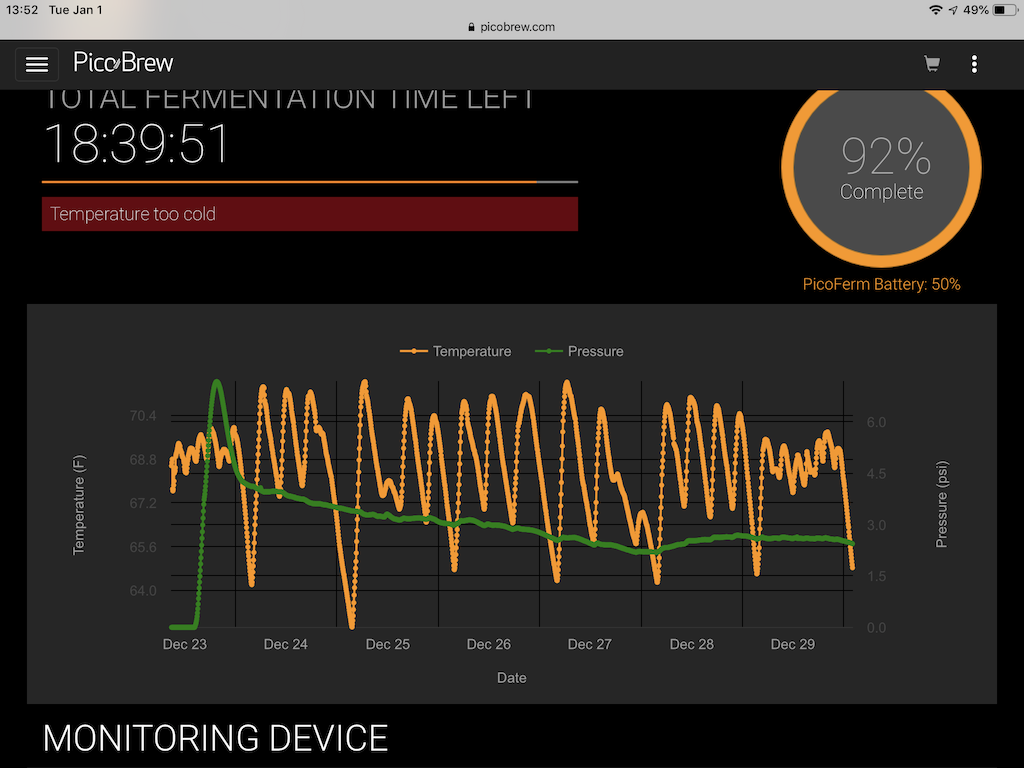 this is unpredictable at best. i was a bit concerned when i fired it up, logged into the brewhouse and noted that the projected fermentation time was longer than the projected battery life. this seemed, problematic. to be fair, this seemed to stabilize after a few days and the projected battery life was at a robust 50% with just a day or so to go. then the whole thing died. so on a 9 day projected fermentation it looks like i got about 7 days of picoferm action on the brand new set of duracell batteries that they included in the package.

given that the unit has a micro-USB port, it would be useful for the docs to point out that using this for powering the unit is an option. i will be using this instead of the batteries.

documentation nit - there’s no mention of using this w/a standard USB power supply instead of batteries. that could save folks a lot of frustration. this is a perfect application for rechargeable batteries, if only you knew that the device would last through a fermentation cycle with them. comments in the forum seem to indicate that it’s possible.

seriously, this thing seems to sample temp and pressure every 30 seconds. can i dial that back to 1-2x per hour? particularly if i’m in battery mode.

this is a point of ambiguity, but after leaving the ferment alone for a few days, i logged back in to check on things (fermentation time left: 2 days, battery 50%!) and it had an error about the temperature being too cold. now, it’s been a reasonably minnesota cold december, (it’s actually been pretty nice) but i have a pretty accurate logging thermometer in the same room as the picoferm and the corresponding temperatures don’t appear to have been that different from what’s been observed over the same time period. also, i’ve had the brew keg reasonably close to the radiator in the room to keep it on the warm side.

i’m going to assume that this is associated with some sort of dying gasp from the batteries but i find it tough to believe that we’ve strayed that far from the noted low in the process such that i’d be triggering a temp too cold alarm.

yeah, i’m potentially dipping to the low end of the ideal temp range for the yeast in use, but i think that this might be registering significantly cooler than it actually is. for comparison, here’s the temp associated with the unheated and unfinished portion of my basement over the same time period. note also the keg with the picoferm is sitting reasonably close to a radiator in the dining room.

i’ll be tracking w/a separate logging thermometer for the next brew.

it would be really nice if i could get at the raw sample data. downloading this as a CSV or some other format would be great. at least with the brew cycle i can get a table that i can scrape for raw sampled data. this is simple chart w/o much granularity in terms of visibility into the timestamps

this is more of a nit, but in order to stop the fermentation in the event that you had a failure (like i did for my shankill stout brew), you need to go into the fermentation tab and select “none”. this brings a halt to the fermentation clock, but it might be more intuitive and less frightening for new users to have an option to cancel or re-assign a picoferm to a different brew.

this seems like a missed opportunity. some alerts i’d love to see.